Autumn may be in the country, it does not mean you have to be sad. Despite the colder temperatures and the often drizzling weather, a lot of advantages are also attached to this season. Like chestnuts for example!

They fall in our neighborhood from the trees and I just picked the first this year. Not that there were already many (the autumn has just started) but enough for making a nice chestnut soup. I started with Stijn’s recipe and would like to share it with you.

Oh yeah, since there was a little panic on Instagram because I would pick chestnuts that are intended for the animals … I like to add that I only pick up the ones that are on the edge and /or in the middle of the street. When I see how many of these chestnuts have been driven down by car tires, I think that is dangerous for nibbling animals. So I do not pull them out of the trees and do not pick them up in the forest.

Moreover, there is no shortage of chestnut trees. A lot of people have chestnut trees in the garden and often the harvest is too much to eat themselves. So you can also go there if you have less success in the street :).

And then now … feast!

Yet another nice tip with chestnuts. You can make your own plant-based milk. I also have a very easy way to peel chestnuts.

Have you ever eaten something with chestnuts? Share your favorite chestnut dishes below. 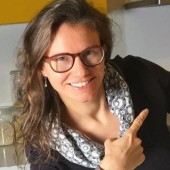 Garlic soup – vegan recipe – Boost your immune system with it

Soup of celeriac and parsnip