Recently I read a pretty funny joke that went like this: “20 years ago we had Johnny Cash, Bob Hope, and Steve Jobs. Now we have no Cash, no Hope, and no Jobs. Please do not let Kevin Bacon die! “

Whether you eat vegan or not … it remains a good joke 😉

What that joke also indicates is that ‘bacon’ is apparently something that many people, not just Americans, seem to be mega-devoted to. In itself that is not surprising because bacon consists mainly of a lot of fat and salt. Two (unhealthy) things that can be rather addictive in a weird way.

In addition, bacon is meat of course … in our opinion, the best argument to no longer cram it in your mouth 😉

Anyway, the fact remains that many people love it. As a concession, we are happy to share our total vegan tempeh bacon option. In other words: tempeh bacon!
I do not dare or can claim that it tastes identical … but it is good.

In addition, our ‘bacon’ is a lot healthier for your body. Even though I expressly say ‘healthier‘ 😉

Super tasty with a salad, between a rich sandwich with vegetables (ciabatta for example) and many other options.

Enjoyed this tempeh bacon recipe? Be sure to leave your comment below. 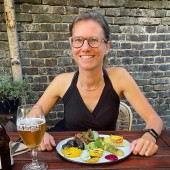